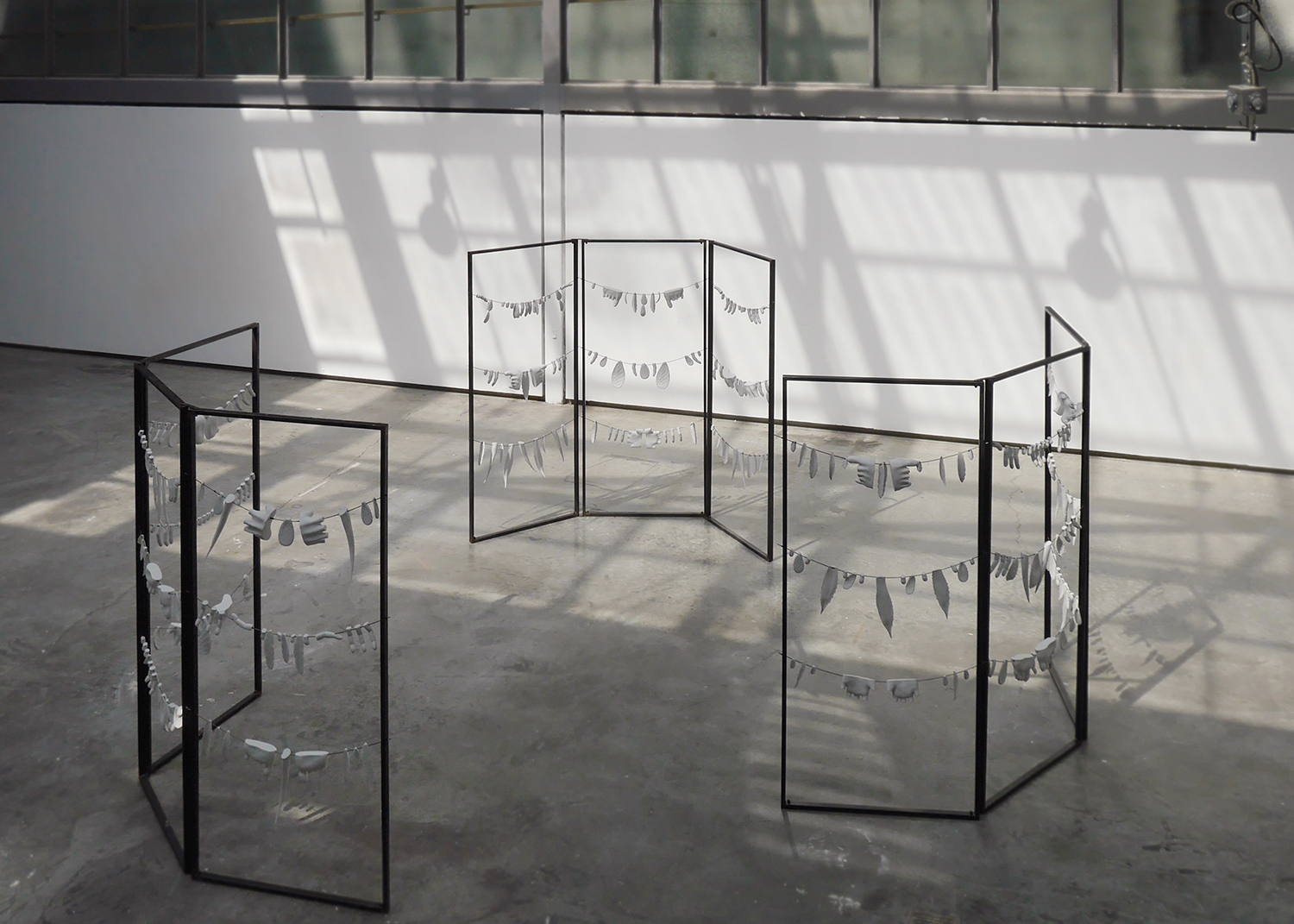 It always seemed to me, looking closely at the work of Elsa Guillaume, that it would have resulted from the unlikely meeting, in the back room of an East End tavern, between the Irishman Jonathan Swift and the Englishman Lewis Carroll, as she observes everyone with the eyes of Gulliver and Alice. Although, one-time-one-one-love figure, identity card, naturalism, biology and explorations of unpublished countries and species, like the British Philip Henry Gosse or the German Ernst Haeckel. Xavier de Maistre all this is not in a studio room shot drawings and sculptures, flying carpet, magic card, ship hold, otherwise belly of a fish as big as a cetacean. The most fantastic imaginary turns out to be the same, it is more tangible there is discovered more improbable than any fiction. Inventing worlds, make the narrations as much as creating representations thus governs his work. William, William, will be great, pieces of natural pieces, voluminous, voluminous, flying, pieces of light, light, light, light and fragments are as uncertain as undeniable. In 1981, on the occasion of the centenary of the creation of the character of Pinocchio, the Italian writer Italo Calvino, author among other invisible cities, had he not declared: “It seems quite natural that Pinocchio has always existed ; on do not imagine a world without Pinocchio. We can not imagine it either without Gulliver or Alice … and today without Elsa Guillaume.

Nevertheless, the universes she offers us are revealed infinitely more complex as the country of Pinocchio’s toys because of the spirit of fables she retains only the surface of appearances that must be necessarily misleading. On one side, each line or each shape, each drawing or each sculpture, each pan or each installation it realizes enjoy winding rather than unfolding self-history and history of the world, the thirst for entrepreneurship and the hunger for discoveries, the most wonderful and the wonders of the unknown and unthought continents, just like Posidonia Rodeo or Spineless Squid … We will not be surprised at the delight who invades us with the idea of ​​getting lost during his adventures, of finally getting over on the other side of a mirror with mercurial liquidity, let it be absorbed Jonah to be spotted on some shores as magical as mysterious from China, Japan, Brazil, Costa Rica or India. On the other, on the story line she weaves patiently outcrops a description quickly more acid than it seems from our real. Succulents thus exposes to heat of the sun petals white flesh almost as soft as porcelain of which they are made. Immersed, in the form of a corporal cosmography, imprison us among the stars and constellations. As for Gymnastics lunar, it is a true coral chrysalis that releases us as much that she chained us. Not to mention Pinnules, Triple Sea Urchin, Cut Squid or Gobé, stalls of pressed fruit, cut fish, marine animals disemboweled with red and almost juicy flesh appearing well more human than vegetable or animal. Because, from Succulentes to Gobé through Mound or Manta Suit, could not we be these indolent meat filaments, these voluptuous and luscious pulp quarters, these hybridizations of flowers, fruits or fish as sensual as lush which dot, for example, the territory of Antropocosmos Microphage?

Elsa Guillaume sends us back to the destabilizing experience of being, like Gulliver, Alice or Pinocchio, facing a world all at once familiar and foreign, ordinary and magical, fascinating and disturbing, stimulating and threatening. But it’s not about simply transforming or to interchange the known and the unknown, the near and the far, the tiny and the gigantic, the present and the future, but to switch from hunter to prey, from desiring to desired, from eater to eaten, from civilized to savage, from master of the world about a comedy where the absurd argues satire. Just a reversal of the situation that makes certainties and things waver established. And his tentacles universe to become sprawling, his fishnet black and dense fillets, his fine line and loose lasso whose loops captivate as much as they capture. But if the taste of adventure you itchy again, beware of siphonophore colonies that time of a life you are luring them of their moving and moving forms and of their bright and luminescent colors. They know more than any other use the facts to produce a fiction that reveals to our body defending the truth of things and the precariousness of life. Elsa Guillaume is the best ambassador. 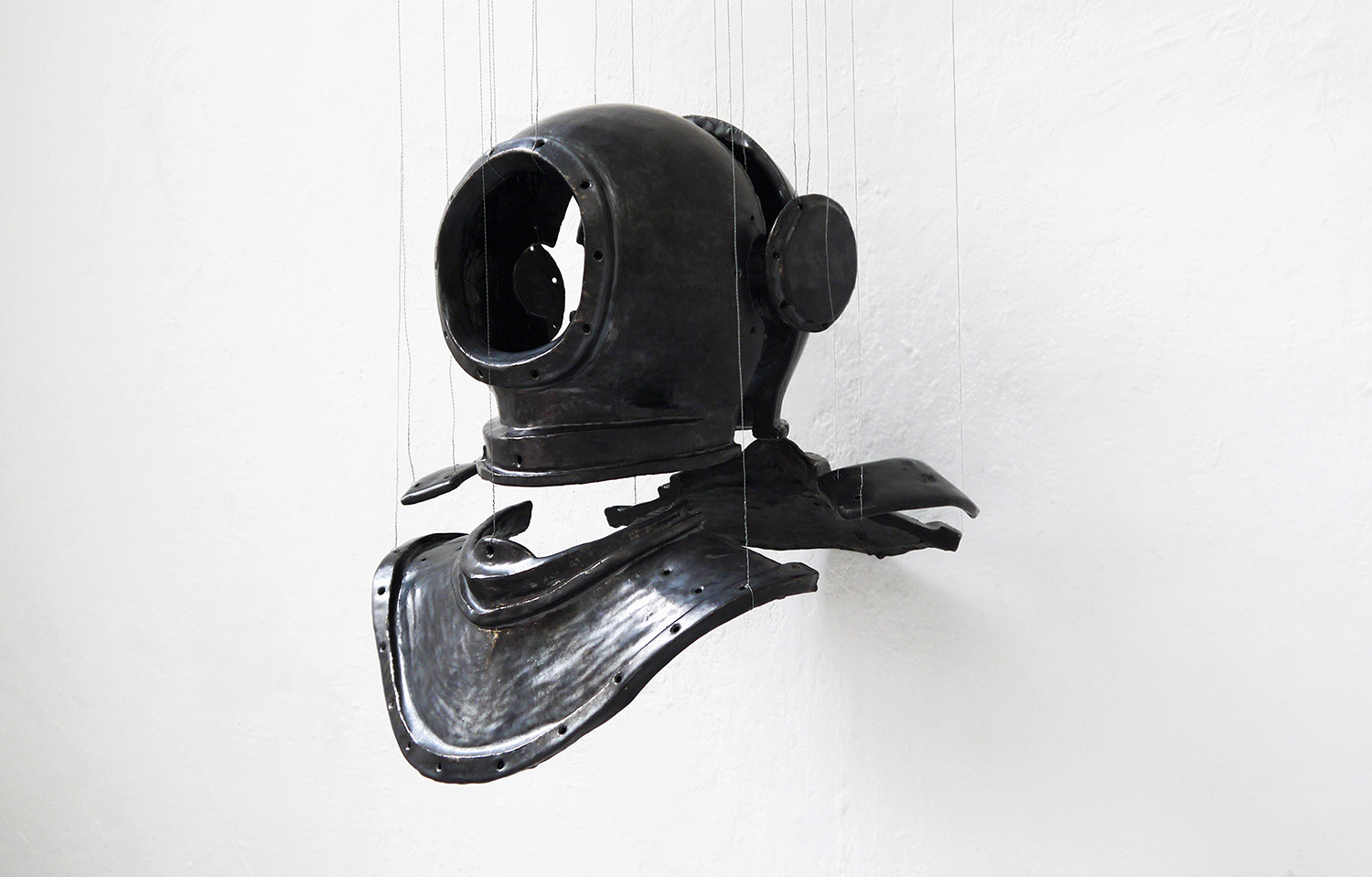 It is characteristic of the imaginary developed by Elsa Guillaume in his drawings, remarkable for his technical resolution in perfect match with the plastic possibilities of the material selected, visually efficient in its formal simplicity and
correctness in the choice of enamels. Moving easily from drawing to ceramic, the artist develops one of his themes of reflection, an analysis of the internal structure of beings and things. Her voluntarily “split” and alveolar invoice often transforms the organs in landscapes, in a “relaxation” plastic hilarious, tinged with strangeness but without real darkness. Show the interior voids, the cavities, but also fill these voids, invade the space like a rhyzome, show beings (animals or humans), surrounded or swallowed by the external context, reveal with grace and humor the hidden complexity of the systems and living tissue, such seems to be the design of Elsa Guillaume, who has great ease in the implementation volumetric, in the continuity of his graphic visions. 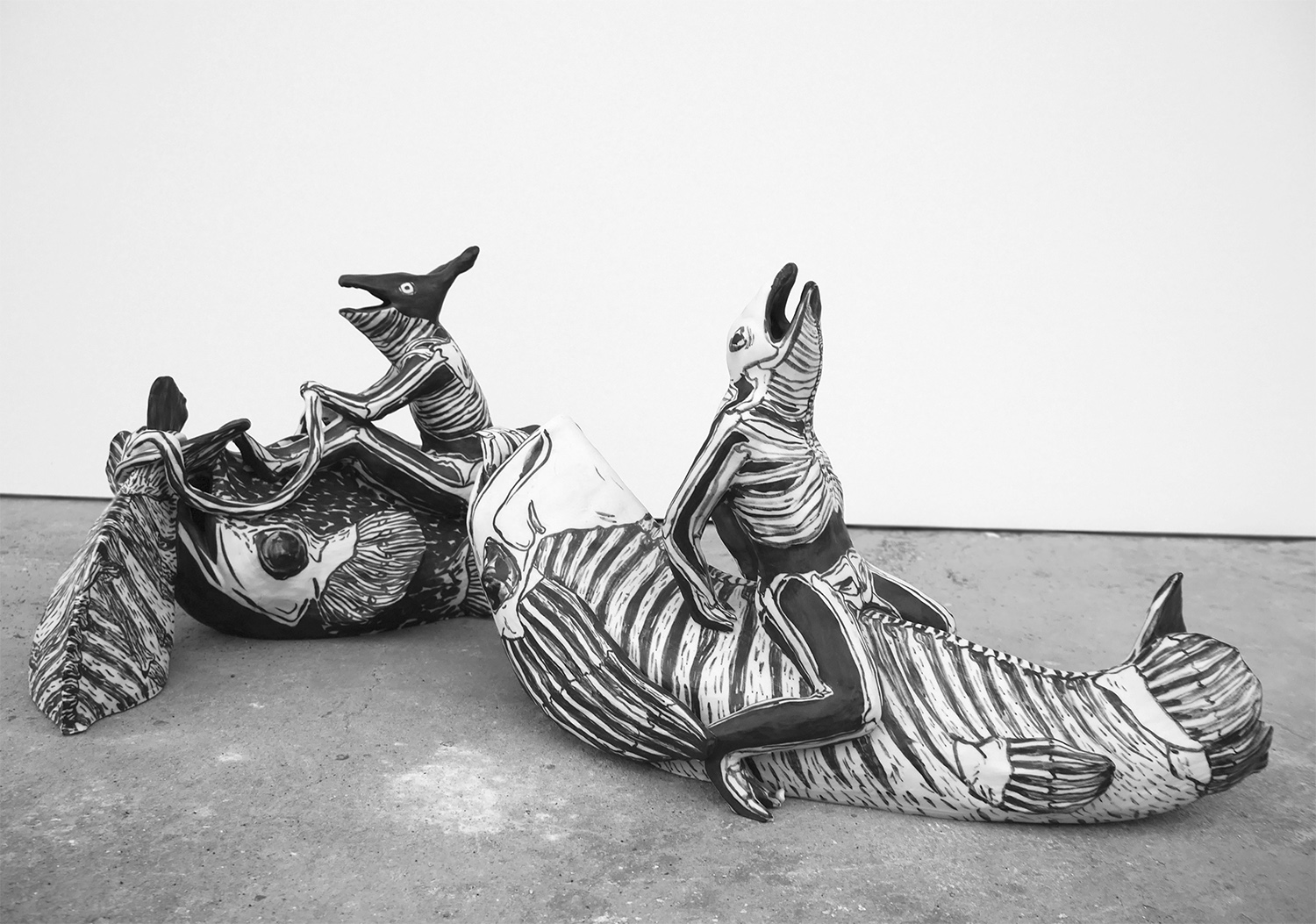 On the surface of the ground floats a constellation of hands and heads humans, water lilies, and fish heads. Nothing in the disposition of the constituent elements of this strange marsh has been left to chance: typologies come together and form a network complex of lines, squares, rhombuses. A geometric order is undeniably at work. Does the latter fall under the mandala Buddhist three-dimensional, Navajos sand painting or still geoglyphs drawn by the Nazca on the Peruvian soil? The represented space changes scale and becomes landscape, map or model of an imaginary island whose vertices are trimmed of war trophies (perhaps the head of an enemy planted in top of a mast as a sign of belonging, or markers of wealth related to vegetation or fishing …) Human figures, half immersed, with closed eyes, disappear gradually to the depths and carry underwater the memory of a land charged with mysteries. Through this archipelago of porcelain, expresses itself the taste of Elsa Guillaume for the aquatic world, its inhabitants dead or alive, the imagination both wonderful and worrying of the insular unknown that we also find, sometimes in the form of sea urchins at the time of the autopsy (triple sea urchin), sometimes of a giant squid ritually cut by the Amazons Indians (Spineless Squid). In contrast to being a long calm river, the ocean d’Elsa Guillaume is studded with “poiscaille”, molluscs, conquistadors, islands and indigenous cultures.